With more and more women climbing, we spoke to Rebekah Drummond about her experiences of combining her sporting passion with pregnancy:

In the era of ‘Pregnant not Powerless’, climbing while pregnant is not the controversial topic it once was. The participation of women in climbing has increased so much over the years, so it’s only natural that there has been an increase of bumps at the wall, at the crag or waddling their way into the mountains.

I only ever had one heated discussion about how driving is more dangerous than top-roping in a healthy pregnancy with a guy who a) didn’t realise I was pregnant when he brought it up, b) didn’t realise I planned on climbing through my entire pregnancy all things allowing, and c) I think thoroughly regretted bringing it up after he realised points a and b. The climbing community is so welcoming and inclusive that aside from that I only ever received positive comments and friendly banter about my ‘weight vest’.

All being said, my climbing did change in relation to my pregnancy. As I write this my 20 m/o girl is currently causing destruction in the living room and whilst baby number two is developing fingers and toes in utero – and already, climbing with this one, feels different than last time.

I would say ‘listen to your body’ – but as a friend told me when I wasn’t sure if I had leaked amniotic fluid or just peed myself a little (I’m still unsure, but it was probably the latter…) – there’s so many new weird and wonderful things happening in your body that it’s really hard to tell what’s normal or not. So instead I’ll say listen to your intuition because just yesterday my body told me I had an insane craving for a couple cold beers, but my intuition said ‘fetal alcohol syndrome’. Each pregnancy is so different, as I’m beginning to realise, so what worked for me may not work for you.

I wrote a blog about climbing while pregnant with my first and what follows has blended extracts of that along with my hopes for this pregnancy. It’s not a guide, but I hope it could provide some inspiration for anyone who’s curious. 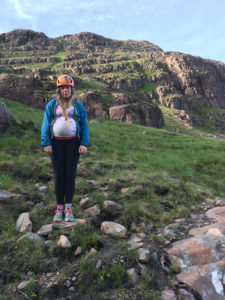 The biggest difference so far is that I’ve told people. I’ll basically tell anyone I meet. I’m so excited and proud that I’m growing another life that I just couldn’t contain it this time. Plus I really wanted to keep climbing. Last time I faked injuries as excuses for not falling off from high and just avoided roped climbing all together so that people didn’t question why I was only top roping, which would be very unusual for me. This time ‘do you mind putting up a top rope for me I’m pregnant’ has become a staple phrase at the local crag, which means I can climb the exact same routes as before without the fear of falling, plus I’m not stressed about anyone ‘finding out’ because I’d already told them!

For my first pregnancy I wrote –

I spent most of my days binge watching Netflix whilst eating anything that dared cross my path.”

This time I’m far more forgiving of myself, which actually means I’m doing more, instead of wallowing because I didn’t go for that 3 hour training session. I try to do a little something every day, even just 5 minutes on the fingerboard or a few squats, and I definitely count chasing a toddler or cleaning the house as cardio! This time I’m aiming to be that woman who maintains just enough clean dishes to eat from, that woman who keeps her toddler healthy and predominantly happy (although she is currently screaming while trying to fit tights over her arms, so I’m working on that) and that woman who retains some of her finger strength/endurance and more importantly, her sanity. 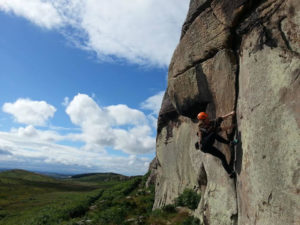 For anyone facing down the barrel of pregnancy and not sure what’s possible, here are some of the things I did previously and hope to do in coming months.

Previously living close to The Newsroom, bouldering was my go-to activity. But there is no definitive information to be found about safe fall heights at different stages of pregnancy. I asked the midwife theoretically how high I could jump off of a box onto a crash pad if there was no chance I would land on my stomach, she looked at me strangely but agreed that my proposed height would be okay. At the wall I would focus on moving well on easy problems and had two projects where hauling my pregnant ass off the ground was the crux. Experienced climbers may be able to make reasonably accurate judgement calls on safe options within limits, but new climbers are less likely to be able to predict this. Making up your own low-level problems would be the safest option.

Last time I felt fine bouldering on steep ground (always close to the floor) but this time I feel like my abs have already started splitting and I can feel my squishy abdomen bulging through the gap, so have mainly stuck to technical lowballs!

If you only have access to a bouldering wall, make yourself a 15-30 move low level traversing circuit that is a challenge to complete. See if you can get a hold further every time. It can be strangely addictive in an “I want to throw up, my arms hurt so bad, but this is really fun” kind of way.

Another thing I have been doing is ‘minute on, minute off’ climbing, but keeping my heels on the floor, it must look ridiculous! But it does the trick, hello burning forearms and no bulging core.

Currently given the nice weather, this is my favourite as my grades haven’t dropped a lot just yet at 8 weeks, so I can still go to the same crags and enjoy the same things. Buy/beg/borrow a full body harness when the time comes, it’s so worth it!

Previously, watching my grades get lower while everyone else got higher was demoralising. When I stepped on the wall I didn’t feel like I was pregnant anymore, I just felt normal but couldn’t climb at the same grade. Compared to walking where I was grumbling and huffing and puffing, climbing felt so graceful. Then I realised that was the single best thing about climbing through pregnancy, still feeling that flow, still solving problems and being amazed at what my body could do, even though I looked like a whale. Although receiving beta-spray from others during pregnancy pissed me off a lot more than it should have – that’ll be the hormones!

Since I mainly climb on my own with my toddler, this time I fully intend to make use of the digital babysitter (i.e. Curious George on my phone, plus snacks and the highchair) – to enable me to make full use of The Prop Store’s new auto belays.

My favourite climbing days are spent in the mountains. Although they have been few and far between with a toddler. Walk-ins to mountain crags were the crux for pregnant multi-pitch climbing, but flowing through easy moves on rock was so worth the huffing and puffing. 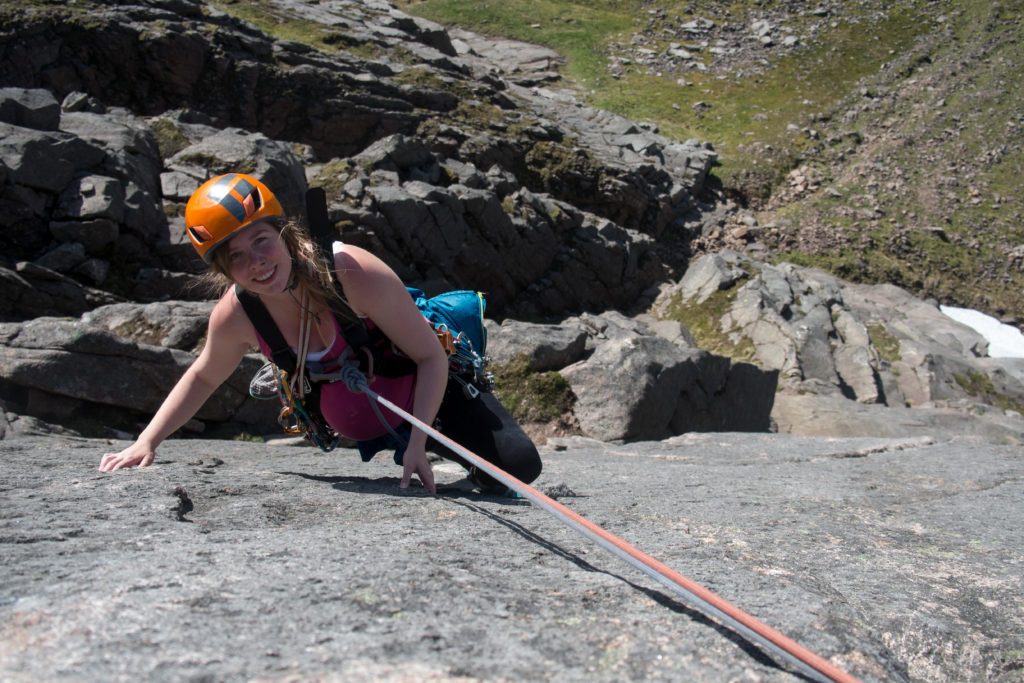 Someone suggested to a friend that he should only climb in a 3 when multi-pitching with his pregnant wife as that would make any potential accident/rescue scenario less stressful. I would feel very stressed in a car crash, but nobody questions a pregnant couple driving a car. For me the accumulative stress of not being able to go climbing throughout my entire pregnancy outweighs the slight risk of one stressful event. That being said I do make choices to avoid difficult descents and inaccessible crags. It’s all about being sensible.

I’m a big fan of shoulder exercises with dumbbells, you get extra brownie points for sitting on the big ‘birthing ball’ to do them and rolling round on your rests. Squats are good for pretty much everything, so a good few weighted ones of those too.

Progressive weight vest am I right?! Although I think baby gains wait faster that you gain strength. Hanging weights around my waist no longer feels very comfortable so instead with one arm, I stand on the ground and simply try really hard to pull the fingerboard down towards the floor. The natural resistance against my pulling effort actually works. It may look ridiculous but it ticks the boxes for pregnancy max hangs!

You don’t realise how core intensive pull-ups are until you see your own abdomen bulging out from between your abs. I’ve been using the same isometric technique used for fingerboarding mentioned above, but instead I stand and try to pull the bar or a knotted rope towards me with my arm at varying degrees of flexion and width positions.

This time I can feel that my abs have begun to separate much earlier, meaning catching holds dynamically can be a bit too core intensive. So I’ve been doing transverse abdominis exercises to try and slow everything down, super boring but super helpful, I only wish I’d done them during my last pregnancy. Here’s a useful video on abdominal exercises.

There’s always something you can do

So, if you’re feeling motivated, go climbing! But that’s a big if. Motivation for climbing waxes and wanes even when not growing a human, so it’s totally normal if it’s gone for 9 months. But if you’re feeling it, managing to climb once a week, or hell even once a month, will stop you feeling too rusty when you pull back on post pregnancy.

Climbing made me feel like me again, not just a giant incubator. I would encourage women to do whatever makes them feel like themselves while pregnant, whether that’s climbing, running, or knitting. You don’t need to be just a pregnant lady, you can still be yourself and grow that little, squishy, cute baby at the same time.

We have a very supportive team at TCA and run Tiny Academy for mums, dads and offspring aged 0-4 at The Mothership and The Newsroom.