How it all started…

When a small 11 year old turned up at The Mothership with his Dad, a few days after we first opened in 2008, it soon became clear that he could really climb.  The following year, when we started the Bristol Youth Squad, Hamish signed up and soon started to demonstrate the beginnings of what would become his prodigious climbing abilities.  As a teenager he seemed to win our adult competitions with ease and a smile and his presence in the wall was always enjoyed by everyone around him.

Recently, you may have seen Spotter Magazine on sale in our centres.  Hamish is one of the 3 talented people who have brought this physical magazine to life. It’s designed to be read and re-read, to be shared and to reflect a real love of the movement and culture of bouldering.

Soon after starting climbing at TCA, Hamish’s real love of outdoor bouldering developed.  Regular trips to Dartmoor, The Peak District and of course to Fontainebleau helped him hone his skills and ascents of problems like Carnage and  Brad Pitt as a 13 and 14 year old respectively were pretty remarkable. It was in this environment where Hamish seemed happiest.  Getting up early to make the most of the best conditions or climbing later under lamps was no problem; as was singing the full version of Bohemian Rhapsody at full volume in the car between the campsite and Roche aux Sabots – because the journey was exactly 5mins 55 seconds!

Inevitably the GB Team got wind of Hamish’s talents and between 2014 and 2017 he went around Europe competing in international comps.  Whilst he did very well in these events, there was always a tension for him.  His love of the movement and the physicality of bouldering, combined with his ability to focus ensured that he operated well in the hot-house of the comps.  Yet his love of the creativity of bouldering outdoors and the beauty of the outdoor environment was the real draw. 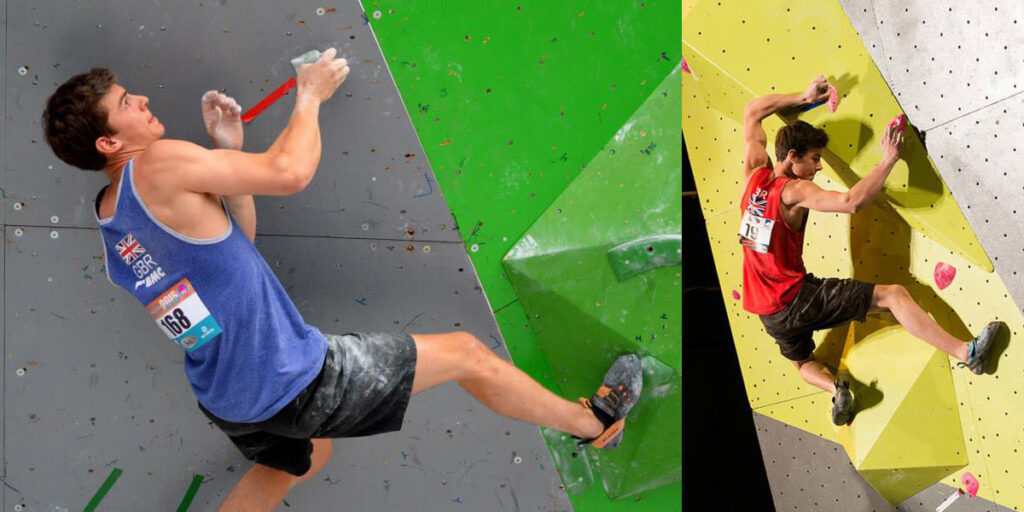 When he moved to Glasgow for university in 2017, it was inevitable that he’d become a central figure in our Glasgow wall.  Coaching and working behind the counter at The Newsroom, his easy manner and infectious enthusiasm made him many friends.  Over his 4 years, he completed most of the hard Dumby test pieces and ticked many problems across the wilder areas of Scotland.  His studies of English and Philosophy enhanced his perceptive mind and developed his expressive abilities – qualities he’s now bringing into the production of Spotter.

A move to Spain in 2020 allowed him to explore the bouldering around Madrid.  His developing environmental awareness meant that he was focusing on a low-carbon lifestyle, using the bus and public transport to get to crags.  During this time, he completed La Pedriza’s hardest problem El Elegido 8B+/C amongst many other super hard problems.

The seeds of Spotter were sewn some time ago and in a typically reflective way, the 3 producers, Hamish, Aiden Roberts and Francesca Rigg, have taken time to refine the concept.  What they’ve come up with is intentionally slow and considered.  It’s beautifully produced. Huge effort has gone into the look and feel of it, as well as the quality of the writing and the photography. 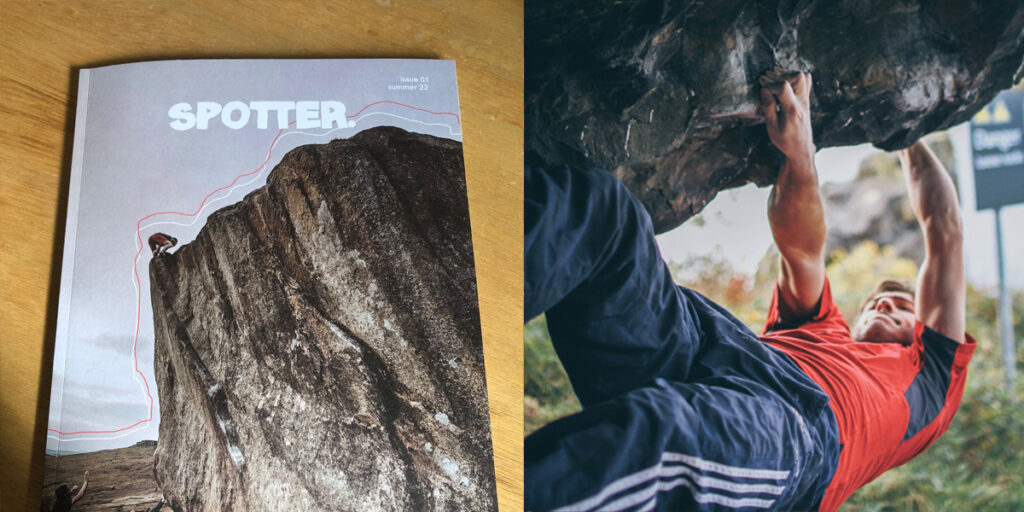