We have the final instalment of TCA routesetter Jonny Kydd’s blog series about the bouldering trip of a lifetime – in 2020!

Uncertainty grows as we move to Brione

The next, and what turned out to be the final stint, of my trip lead me to Brione. It’s a small town situated in Valle Verzasca in southern Switzerland. So far, it’s the best place I’ve ever been climbing. The combination of rock quality, aesthetics of the lines, enjoyment of the movement & the variety of the climbing make it hard to beat. The only thing letting it down is the volume as it isn’t the biggest crag. Along with the quality of the climbing, it’s a contender for one of the most beautiful places I have been with 360 mountain views and a river running through the valley that has the clearest water that I have ever seen.

When I last posted back at the end of October, Switzerland had just brought in new restrictions in order to try and prevent a national lockdown, stating that this was the last chance to avoid a lockdown. With pretty much the rest of Europe going into some sort of lockdown, I wasn’t convinced that the minimalist measures of wearing a face mask when social distancing wasn’t possible. I was also not convinced that merely limiting public gatherings would be sufficient to stop case numbers rising. These measures were announced just before I arrived in Brione and would be given a couple of weeks to see if they were effective. I was therefore expecting to have at least 10 days of climbing before getting chucked out. The case numbers continued to rise (peaking at over 1200 cases per 100,000 people, if I remember correctly) and ICU beds reached capacity, but the Swiss authorities prioritised the economy over lives and didn’t enforce a lockdown and I was able to spend a month in Brione. It still led to an uncertain first couple of weeks, making it difficult to know what to focus on. There were a couple of harder climbs that I wanted to do, but if I only had 10 days there it would be unlikely to be enough time to get either of them finished. So instead I decided the best option for me was to drop the grade and try climbs that I would likely to be able to do in a session or two.

It took me a bit of time to get into my stride and adjust to the smooth rock after having spent a month on sharp crimps and the first day in Brione was a bit of a shock to the system. In Chironico you would very rarely see non-climbers at the crag or the parking but Brione is definitely more of a tourist spot. When we arrived it was very busy with climbers, walkers and tourists, not exactly what you want to see when covid restrictions have just been strengthened… Fortunately, this day seemed to be a one-off and the rest of the time there was a lot quieter, making social distancing very achievable with only the most popular boulders being busy on the weekends. Whilst adjusting to the style in Brione, I was still able to send some pretty cool climbs in the first week with the highlights being: ‘Black Pearl’ (7C+) a cool roof climb that has a funky toe hook start section which leads you into a crux heel hook move; ‘There is no Spoon’ (7A+) a water polished slab in the riverbed that has a cool toe hook catch that even Dan would have been proud to have set; and ‘Atlantis’ (7C) a fun little compression prow with a big move to a jug at the end. 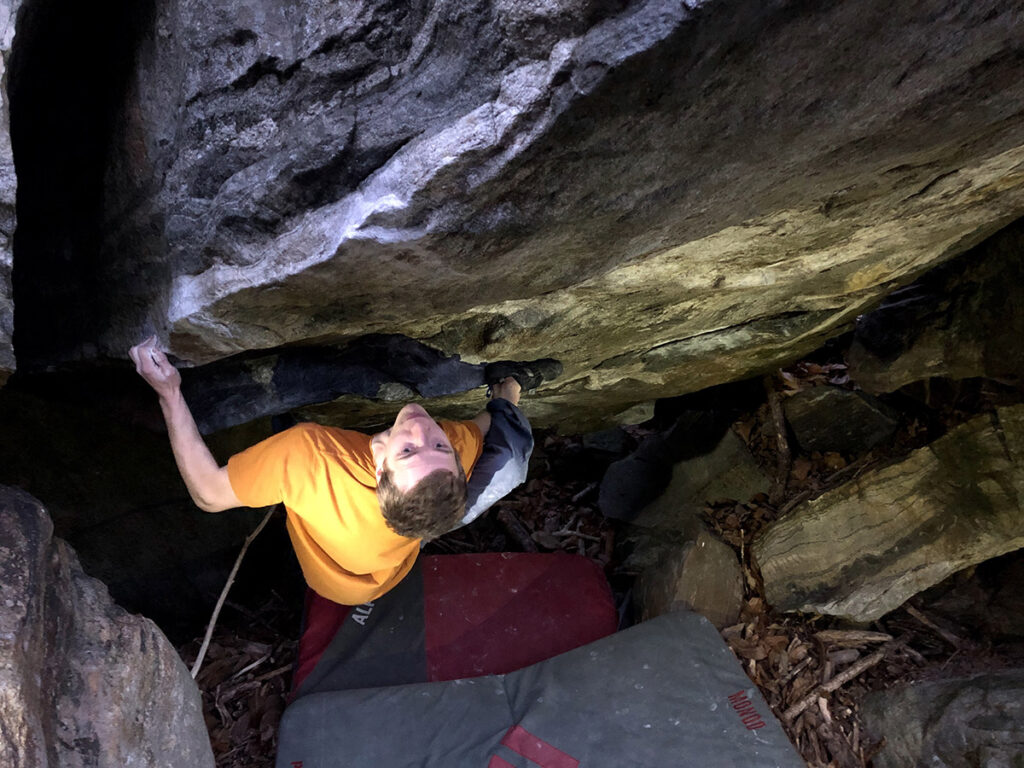 The clock is ticking

I think the pressure of it possibly being my last week helped me try that little bit harder and got me up things a little bit quicker! I particularly enjoyed: ‘Yoga Roof’ this one climbed a very unique rock feature and could only be tried ground-up making it a bit tricky to figure out before getting the send; ‘Fuoco di Paglia’ was a cruxy one-mover right off the deck that leads into rocking up on heel before traversing on some levels slopey crimps; and ‘Frogger’ a climb that is almost always wet but has a great bit of foot jamming and pulling on good holds in a roof that is somehow still pretty tricky! 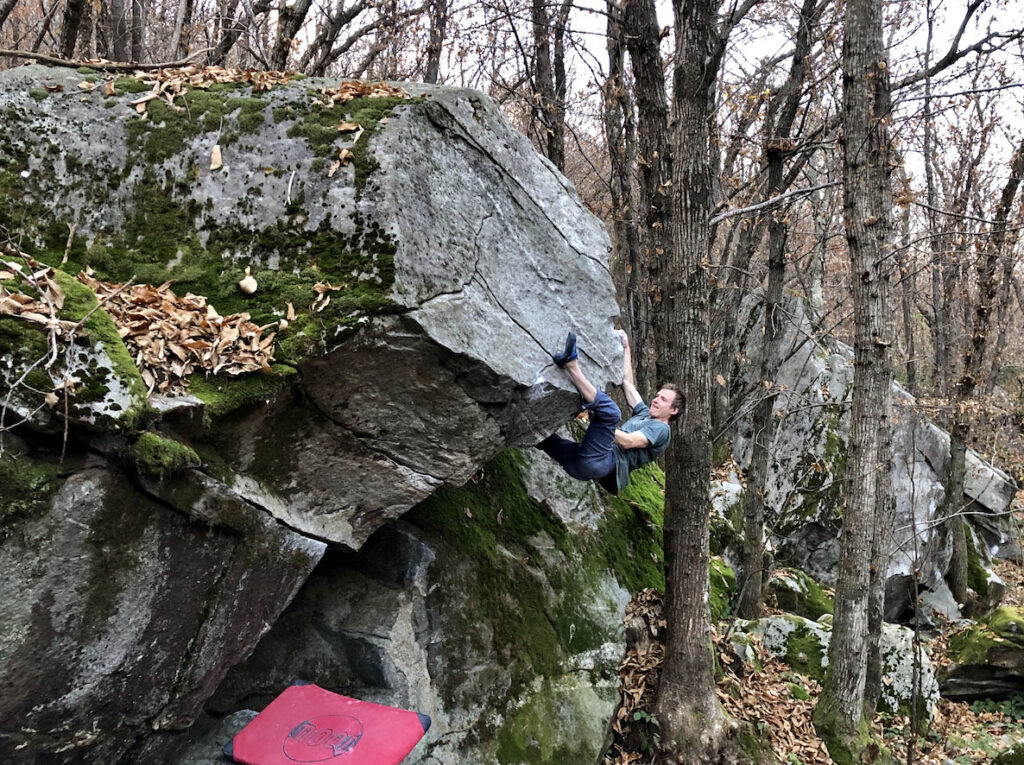 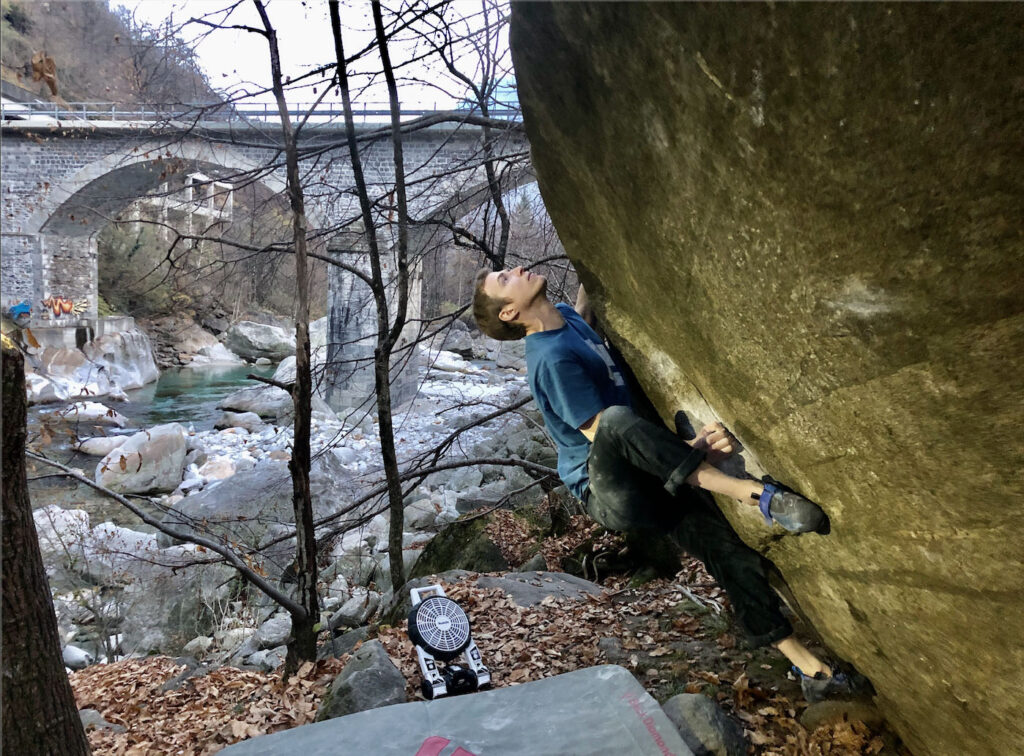 The rock up move on ‘Fuoco di Paglia’ 8A

Just as I was starting to build a bit of momentum I was struck by a bit of bad luck and picked up a hip injury whilst trying the sit start to ‘Forever More’ (8A+). The sit adds a hand move and a couple of foot moves into the crouch start and one of those is a high step where you bring your foot up to the same height as one of your hands and just below the other in quite a bunched ball. It was when I was trying this move that I felt a strain on the inside of my hip and struggled with certain moves for the rest of the trip. I did manage to find some climbs that didn’t hurt my hip and came away with sends of ‘Beast’ (8A), ‘Molonk Left’ (7C+), ‘9th Power’ (7C), ‘Enjoy and Respect’ (7C), and ‘La Palmita’ (7C) before the weather turned bitterly cold. It was time to head to a lower altitude and a sunnier valley (Brione only gets ~4 hours of sunlight before the sun is blocked by the mountains) so I headed to Cresciano and planned to be there for the last couple of weeks of my trip but sadly the conditions weren’t great there either.

It had rained all morning on the day that I arrived in Cresciano so I went to have a look around the boulders in the afternoon to see what would likely to be dry the following day. But then that evening it rained even heavier than in the morning. There were some boulders that were dry the next day but it was still really cold and most of the day was spent just trying to keep warm and find dry rock. That evening I checked the weather forecast and 30-60cm of snow was forecast for the following day along with the temperature not getting above 3 degrees and rain for the next 5 days. This left me with a decision, 1) spend a week in a van in freezing temps with snow and rain but potentially getting 5ish more days of climbing if the weather forecast for the week after turns out to be good, or 2) cut the trip short and go back to a warm house. I decided that the risks outweighed the benefits and it made sense to come home, especially with my hip still causing me difficulty. It’s not the way I would have chosen to end the trip but it’s much better than getting kicked out 3 weeks earlier because of a lockdown!

So that’s it, the year of travelling has come to an end. I’ve had some great times, along with some stressful times. But rather than dwelling on the fact that I picked a pandemic year to travel and spending however long in lockdown, I’m grateful that I have had the opportunity to go on a climbing trip this year as so many people haven’t and I still spent almost half the year in my van in some of the best climbing locations in Europe. I’m looking forward to getting back to routesetting at TCA and using all the awesome climbs that I have tried as inspiration to create some problems that you will enjoy, that will challenge you, that will temporarily frustrate you, and that will make you want to come back for more!

Let’s all hope that this vaccine is effective and long-lasting so we can all go back to climbing care free!

For more from our Black Diamond Local Heroes, check out BD Local Hero posts on this blog.